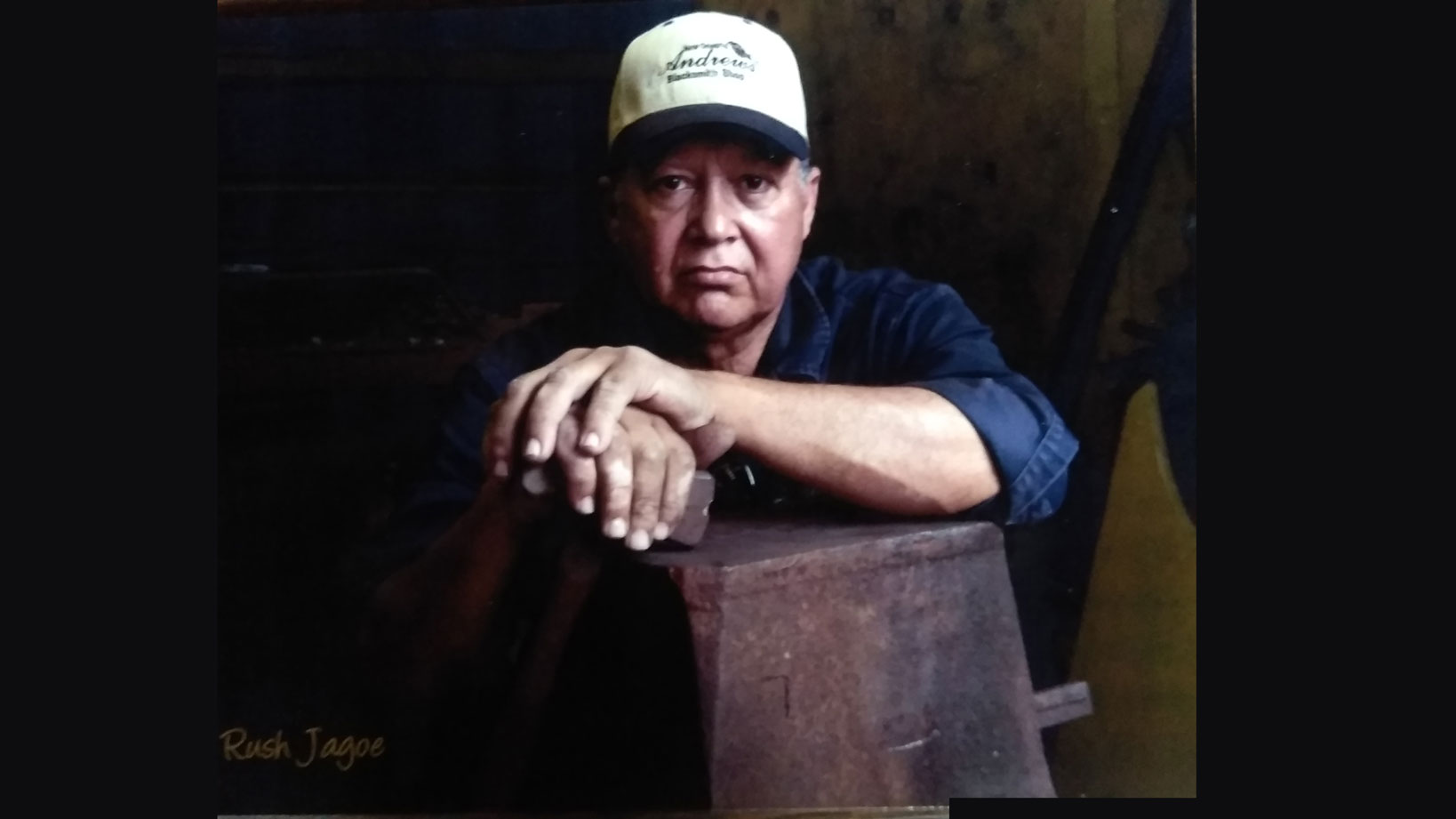 It’s a hot and muggy day in late June as I approached the unassuming building at 1873 Agriculture Street in New Orleans’ historic Seventh Ward. This area of the city, unlike any other, has been home and host to countless craftsmen and trade workers over the last dozen generations. From visual artistry to woodwork, and from cuisine to ironwork, the residents of New Orleans’ historic Seventh Ward have fashioned much of the city’s style and culture with their own skill and sweat.

To the uninitiated, the building that houses Andrews’s Welding and Blacksmith gives no hint at the creative potential within. As I pass through the front gallery and into the blacksmith shop in the back, two things hit me immediately. The first is the number of pieces and projects in the works. There are items of furniture, stair rails, wrought iron fencing; but no matter the stage of the project, each seems to call out to be looked at and admired. Four apprentice ironworkers man different workstations and all are focused with an intensity of a master sculptor pulling perfection from iron, steel or aluminum instead of clay.

The second thing that hits me is the heat. 93 degree days in New Orleans can already feel 10 degrees hotter; add to this the heat from multiple furnaces and the constant labor of creation and you have an environment that only those truly dedicated to their craft would ever consider tolerating.

Darryl and Lolette Reeves, the owners of Andrews’s Welding and Blacksmith is assisting one of his journeymen with a number of metal fence pickets. In a matter of minutes, he fashions the heads of several pickets; rolling, striking and shaping the square metal rods until a stylized leaf form at the head of each rod as if it had somehow paused there on its way from tree to the ground. No doubt the finished project will grace the front yard of a mansion on Saint Charles Avenue in the Garden District or a heritage estate on Esplanade in Treme’.

Much like the shop, Darryl Reeves is unassuming, welcoming and focused on his life’s passion. I’m greeted with a solid handshake and an immediate description of the project he’s working on, and then he leads me back to the front gallery where it’s much cooler.

We sit and begin the interview. Mr. Reeves tells me about his youth and learning to weld in order to help in his parents’ awning shop that was just down the street from where we sat. I learned about his experience being drafted into the military during the Vietnam War as a communications specialist. Then he describes his journey to building his Blacksmith shop on Agriculture Street and being forced to relocate to Donaldsonville, Louisiana in the wake of Hurricane Katrina.

Despite the hardships of moving his shop and business to Donaldsonville, Darryl returned to rebuild in New Orleans. When I asked why, after three years of effort in establishing a practice in Donaldsonville, would he start all over again on Agriculture Street?

“New Orleans is our home,” was the simple reply, and the look in his eyes said that he knew that I would understand.

While we talked, Mr. Reeves impressed me with his awareness of the particular music created by his shop. Several times I noticed his ears perk up, or he would glance toward the shop in the back. I asked about this and he explained that, beyond the Motown selections that played through the shop stereo, there was another music that he listened to.

“After all these years, you get a sense of all of the sounds of the shop. How it’s supposed to sound when everything is right,” he said, “It’s kind of its own symphony.”

“I can tell you how every machine, tool, and a piece of equipment is supposed to sound when it’s being used properly. I can tell that if it doesn’t sound right, if it’s the equipment failing or if it’s the fault of the man working the equipment. More than that, I can tell how everything is supposed to sound together. If something sounds out of place in the middle of all those sounds, I can get up and go right to the point of the problem and fix it.”

The smile in his eyes as he spoke told me of a confidence and a pride that wouldn’t allow me to doubt his ability.

We talked a bit about how the master craftsmen were a rarity in this modern world of mass production and Mr. Reeves jumped at the opportunity to not only agree but supply a solution that he is already a part of. He explained his foundation of the New Orleans Master Crafts Guild, with Jonn Hankins who manages the program and Jeffrey Poree, a master of ornamental plaster, masonry and tile setting.

The website reads:  “Established in 2012, the Guild was set up to address the growing need for a class of skilled laborers to maintain New Orleans’ historic building stock.  Building on local craftsmen traditions, including apprenticeship training and ground-level networks, the Guild seeks to revive the building trades for a new generation of builders.” 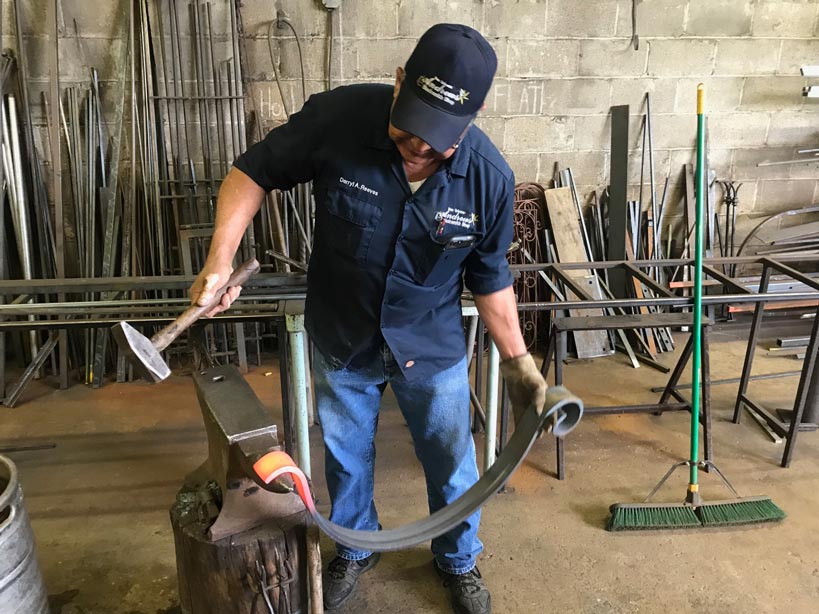 As a fellow New Orleanian, I see an organization like this as a means of keeping the life-blood of New Orleans’ architectural flair pumping through the city. As Mr. Reeves explained, one can see the uniqueness of our city in the ironwork. African slaves were brought here because they were already masters in iron craft. They worked with blacksmiths from France and Spain who had their own styles and, around 1850, New Orleans-style ironwork evolved into something truly unique and special in the world.

Through the multitude of restoration projects trusted to this master blacksmith, it is likely that Darryl Reeves may be the only man in his field as intimately aware of the differences in the styles of African, French and Spanish ironwork and how they evolved into the New Orleans style prevalent today.

“I had to take those pieces apart, understand how they worked together and recreate the whole so that the finished piece was exactly as it was when it was first forged,” Reeves described how he worked on projects like the restoration of the ornate gates of the Presbytère and the massive gate at the Chalmette National Cemetery, and the fabrication of the fence of the Cabildo in a way that would impress even the original craftsmen. It is very likely that without efforts like the New Orleans Master Crafts Guild this centuries-old creative knowledge would pass out of our grasp and into history.

After over 50 years of service to his craft and his city, I asked the now 68-year-old Maestro what he planned to do next. After a pause to take a call from the owner of the Hotel Monteleone regarding a project, he grinned and related, “Next, I want to finish out the gallery and fill it with pieces of artwork that I create myself. I’ll keep the shop working on projects, but I’ve got so many ideas I’ve got to get out of my head, it’s ridiculous!”

Leaning back in his chair, he continued, “I want to have some space dedicated to giving demonstrations, so people can know a little bit about how ironwork and blacksmithing is done and maybe spark more interest in the craft.”

I wrapped up the interview by remarking on his obvious passion for his work and the part he plays in the greatness of the city we both loved and accepting an invitation to visit again to see his gallery full of finished works. It’s an invitation I’m offering to you, as well; 1873 Agriculture Street in New Orleans’ historic Seventh Ward, come and see a master at work.